What’s the most famous Christmas lamp?

It has to be the leg lamp in “A Christmas Story.” Probably one of the most iconic, not to mention bizarre, film props of all time, it plays center stage in one of the funniest scenes in the movie… watch the scene here.

Sadly none of the three original leg lamps by Production Designer Reuben Freed exist (they were all broken during production of the film). But you can buy reproductions at the Christmas Story House and Museum. The house was purchased by Brian Jones on eBay for $150,000. Over 50,000 people from all over the world visit the house and museum located in Cleveland, Ohio each year. 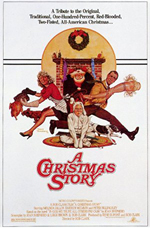 A Christmas Story is a 1983 American Christmas comedy film based on the short stories and semi-fictional anecdotes of author Jean Shepherd, based on his book In God We Trust: All Others Pay Cash. It was directed by Bob Clark. Now a Christmas season classic in the United States, it is shown numerous times on television, usually on the networks owned by Turner Broadcasting. The film earned director Clark two Genie Awards. In 2012, the film was selected for preservation in the National Film Registry by the Library of Congress for being “culturally, historically, or aesthetically significant”.